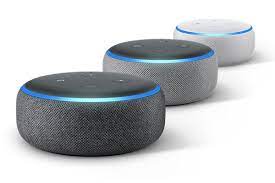 Amazon Alexa is a virtual assistant technology largely based on a Polish speech synthesizer named Ivona. It was bought by Amazon in 2013. Alexa lives in the cloud and is happy to help anywhere there’s internet access and a device that can connect to Alexa. It can perform a number of preset functions out-of-the-box. Alexa is a magical AI Device made for voice commands and to perform functions accordingly. It was first used in the Amazon Echo smart speaker and the Echo Dot, Echo Studio and Amazon Tap speakers developed by Amazon Lab126. The device is capable of voice interaction, music playback, making to-do lists, setting alarms, streaming podcasts, playing audio books. It also supports features like providing weather, traffic, sports, and other real-time information, such as news. Alexa can also control several smart devices using itself as a home automation system.

Most devices with Alexa allow users to activate the device using a wake-word (such as Alexa or Amazon); other devices require the user to click a button to activate Alexa’s listening mode, although, some phones also allow a user to say a command, such as “Alexa” or “Alexa wake”.

As of November 2018, Amazon had more than 10,000 employees working on Alexa and related products. In January 2019, Amazon’s devices team announced that they had sold over 100 million Alexa-enabled devices.

In September 2019, Amazon launched many new devices achieving many records while competing with the world’s smart home industry. The new Echo Studio became the first smart speaker with 360 sound and Dolby sound. Other new devices included an Echo dot with a clock behind the fabric, a new third-generation Amazon Echo, Echo Show 8, a plug-in Echo device.

Alexa is a magical AI Device made for voice commands.

Alexa can perform a number of preset functions out-of-the-box such as set timers, share the current weather, create lists. It can also access Wikipedia articles. Users have to say say just a word “Alexa” to alert an Alexa-enabled device of an ensuing function command. Alexa listens for the command and performs the appropriate function, or skill, to answer a question or command.

Alexa is a magical AI Device made for voice commands and recognize actions to be performed.

When questions are asked, Alexa converts sound waves into text which allows it to gather information from various sources. Behind the scenes, the data gathered is then sometimes passed to a variety of sources including WolframAlpha, iMDB, AccuWeather, Yelp, Wikipedia, and others to generate suitable and accurate answers. Alexa-supported devices can stream music from the owner’s Amazon Music accounts. It have built-in support for Pandora and Spotify accounts. Alexa can play music from streaming services such as Apple Music and Google Play Music from a phone or tablet.

In addition to performing pre-set functions, Alexa can also perform additional functions through third-party skills that users can enable. Some of the most popular Alexa skills in 2018 included “Question of the Day” and “National Geographic Geo Quiz” for trivia; “TuneIn Live” to listen to live sporting events and news stations; “Big Sky” for hyper local weather updates; “Sleep and Relaxation Sounds” for listening to calming sounds; “Sesame Street” for children’s entertainment; and “Fitbit” for Fitbit users who want to check in on their health stats. In 2019, Apple, Google, Amazon, and Zigbee Alliance announced a partnership to make smart home products work together.