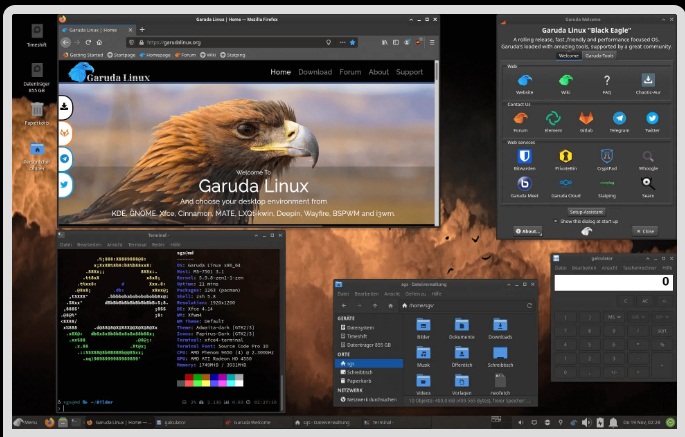 About Garuda Linux : Garuda Linux is an Arch Linux based distro . Garuda comes with a super easy installation, 15 different variants to choose from, advanced BTRFS file system, timeshift system snapshots accessible from grub for enhanced system reliability, garuda assistant for deep system control, garuda gamer and so many other features that we don’t see anywhere else. And Garuda is visually stunning on all the desktop environments. Garuda Linux might just well be the cure for your distro-hopping , Garuda Linux Look Like iMac .

Garuda Linux is a Linux distribution based on the Arch Linux operating system. Garuda Linux is available in wide range of popular Linux desktop environments, including modified versions of the KDE Plasma 5 desktop environment. It features a rolling release update model using Pacman as its package manager. The term Garuda, originates from Hinduism, which is defined as a divine eagle-like sun bird and the king of birds. Garuda Linux Look Like iMac

The most important thing is that Garuda Linux is Indian, at the top of the website of Garuda Linux is written श्री , It has been made by Shri Shrinivas Vishnu Kumbhar and assisted by Naman Garg and Rohit. They have used C, C++, Python, D, Java languages in it.

How To Install Garuda Linux

See also  Is it really possible to connect ps5 to discord?

2 : Disable fastboot and secure boot. It may not be possible to disable the latter explicity – try clearing the secure boot keys instead. Check your the manual of your device/motherboard for further info.

3 : Make sure that your device’s SATA controller is set to AHCI mode in your device’s setup utility. Otherwise the Linux kernel may not be able to detect your drive.

4 : If your firmware supports UEFI then configure your device to use UEFI only in its setup utility. UEFI is much preferred over BIOS whenever possible.

6 : From the setup utility, boot to the usb drive:
You might see separate commands for the same device. For example, you might see UEFI USB Drive and BIOS USB drive. Each command uses the same device and media but boots the PC in a different firmware mode. We recommend to boot the drive in UEFI mode if listed.

See also  5 Reasons to Switch to Firefox and Avast Antivirus

7 : After booting the live media, start the installer and follow the guided installation procedure.